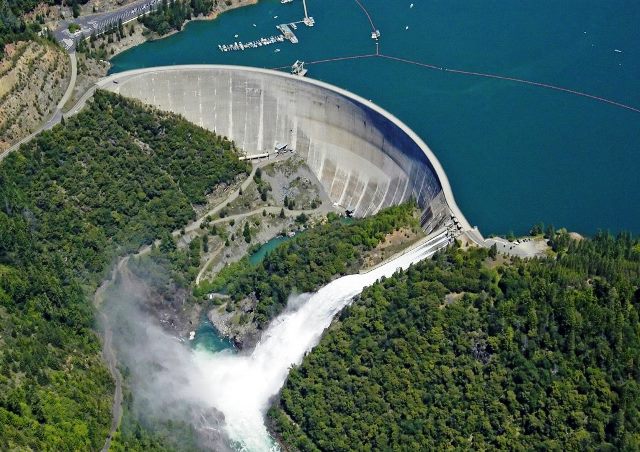 A dam is a Civil Engineering construction which serves to contain the water of a natural course with two different aims, either alternative or simultaneous, according to the cases:

Dams must fulfill a double function:

Dams can be grouped into two major categories on the basis of their composition:

The selection of one or the other type depends on the topography and conditions of the ground.

There are three different subcategories:

According to the distribution of materials:

For the construction of the dam side in the course of the river, it is necessary to divert the river to create a dry work area at the dam site.

This dry area can be created in two different ways:

It is necessary for dam construction to transport large amounts of construction material, in many cases across very irregular or mountainous land. Therefore, it becomes necessary to construct provisional access roads and bridges, as well as tunnels (in occasions) or even to carry out slope filling works, etc.

Moreover, depending on the function to be fulfilled by the dam, different water pathways must also be built -most of them underground- including the respective water inlet and outlet structures.

The construction method varies depending on the type of dam:

There must be interruptions during the construction, so that construction joints are produced, which are practically horizontal shaped. Besides, the so called functional joints are constructed in order to prevent cracks from occurring in the concrete expansion and contraction processes -with possible seepage and resistance reduction-, causing the division of the dam into blocks with certain independence from each other. After the project completion, when the dam’s own weight acts, and prior to filling the reservoir, cement suspension is injected in the block cracks in order to achieve the monolithic structure.

Concrete is saved by using this method, together with a lower setting heat, thus avoiding the functional joints. Therefore, it is more economical than the previous technique.

At the dam toe, on the upstream side, the slab is connected to a concrete retaining wall which forms the transition between the rock subsoil and the impervious concrete slab.

The fundamental defect of the concrete face is the great difference in deformability compared to the material of the dam, which makes it very sensitive to possible dam settlements, which may leave the wall unsupported, and therefore they are reinforced in two directions.

The advantage lies in the fact that, besides being impervious, the material is also flexible, so that it adapts very well to dam settlements. Additionally, the construction and repair are easy and fast, and in the event of cracks occurring, they may close on their own thanks to the plasticity feature of the material.

The construction method is similar to concrete facing rockfill dams, with the difference that the asphalt layer is laid once the dam body has reached its definitive height. The face is generally built in several layers (30-50 cm thick), and it must be supported on a flat surface made of porous or asphaltic concrete. The tamping is done with rollers moved from the crest.

The drainage capacity of diversion tunnels is generally designed to have a 30 to 50-year return period flood event, in order to prevent flooding during the construction. Therefore, the two major risks associated with dam construction during the construction stage are: 1) The possible flooding of the works due to rain-induced floods (they are very sensitive to natural hazards), as such flows are not contained by the diversion elements; and 2) The risks derived from the necessary explosions to demolish the temporary cofferdams.

The dam toe is one of the most important elements in the construction of concrete facing dams. Its correct formation is essential to assure the watertightness of the dam.

Internal erosion may develop in the joint zones between the impervious material of the dam core and the integrated concrete structures (bottom drain, etc.). In order to prevent this phenomenon, they must be planned and constructed with special care.

Generally, because of the large loads transmitted to the ground due to the “arch” effect, it must be resorted to extensive foundation works.

Concrete may be altered by the presence of meteorological or environmental agents, by increasing its resistance in direct proportion to its thickness. Increase in thickness may lead to being less demanding with the quality of the materials in order to save costs.

As for the basin (bowl-shaped piece of land which serves for containing water) and the dam site (piece of land where the dam itself is located), they are required to be impervious, so that it is necessary to prevent seepage insofar as possible. Due to this, it is vital to conduct a proper ground study in order to get to know its characteristics and mechanical behavior. For example, limestone soil which may have caverns would be bad soil, whereas marl or granite grounds (provided they are not jointed) show a good behavior.