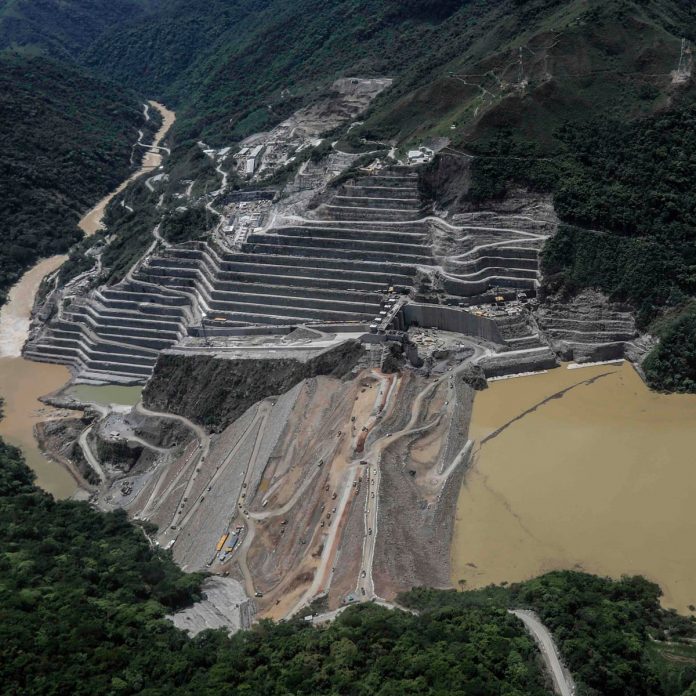 Dean Brox, Independent Consultant, Canada
Investigation of recent collapses in the waterways of hydro schemes, after start of operation and during construction, make it apparent that the main causes are due typically to design errors – not construction defects – and due to the incomplete identification of weak geological zones during excavation. Dean Brox reviews recent collapses and the recommendations for addressing the costly consequences of collapses both in expensive repair operations and the loss of generating revenue.

Design and construction of hydropower tunnels is based on significantly different design criteria and practices in comparison to other tunnels for civil engineering infrastructure. Given that they are subjected to internal and dynamic loading during operations, the performance of these tunnels can only be monitored regularly by pressure instrumentation. Dewatering of the watercourses for physical inspection require operation outages and the loss of generation and associated revenue. Dewatering may also cause a negative impact to the integrity of the tunnel.

Design of a hydropower tunnel should therefore be based on a thorough review of the possible worst case operating conditions. Reservoir schemes typically maintain constant pressures in watercourses with run-of-river schemes subjected to seasonal fluctuations and their associated significant pressure variations. Projects that are designed on multiple intakes within a large watershed can be expected to result in significant pressure oscillations within a watercourse.

For predominantly unlined hydropower tunnels, the final design is only completed after a thorough evaluation of the encountered geological conditions and the design and application of any final lining needs at as required and at relevant sections.

Since 1995, more than 300km of low-pressure hydropower tunnels have been excavated using double shield TBMs in conjunction with precast concrete segmental linings. These have been completed successfully with no problems reported to date.(1) Where there exists the risk of squeezing rock conditions it may be more appropriate to adopt a single shield TBM. These approaches have achieved good rates of production as well as providing greater safety against risks associated with variable and difficult geological conditions including fault zones and rockbursts due to release of stresses in headings beneath high overburdens.

It is also important for clients to share all relevant information about the planned modes of system operations, especially for design-build delivery projects, so that all modes of operation can be fully understood and considered and incorporated into the final design of tunnel linings.

Notable historical collapses of hydropower watercourses that occurred in the 1950s and 1960s include the Kemano project in Canada, the Snowy Mountain Project in Australia and at the Lemonthyme project in Tasmania, Australia. The collapse at Kemano occurred after three years in operations and included a large 25,000m3 collapse. A total of three collapses after four years of operations occurred in the Snowy Mountains scheme and included a total volume of about 3,000m3. The collapse at the Lemonthyme tunnel occurred after five months of operations and involved a volume of about 1,500m3.

Along with insurance investigations, legal proceedings resulted for most of the tunnel collapses due to the substantial repair costs involved and the loss of power generation revenue due to the shutdowns. Most of these collapses resulted in financial costs exceeding US$250 million and a loss of generation for up to 24 months.

The 100MW Glendoe installation is located on the southwest side of Loch Ness and includes an 8km x 5m power tunnel excavated on an upward gradient of 12% using an open gripper TBM. The internal operating head pressure is 600m and the flow capacity is about 18.6m3/s.

The project was constructed under a design-build contract with a specified design life of 75 years. The hydropower plant was to be operated intermittently as a stop-restart system subject to reservoir water supply availability. This would cause highly variable internal pressures to the tunnel.

The 120MW Rio Esti hydropower project is located in Chiriqui Province of western Panama, about 30km north of the city of David, at an elevation of about 220m. The scheme comprises the Chiriqui and Barrigon Dams and reservoirs, a 6.5km canal, a 4.8km x 10m diameter headrace, and a surface powerhouse. The total head is 112m with a flow capacity of 118m3/s.

The project was procured under a compressed design-build contract of 33 months to meet a power generation purchase agreement deadline. The headrace was designed and constructed as a near-fully shotcrete lined excavation since there was inadequate time in the schedule for a final concrete lining, even from multiple access adits. The geology on the tunnel comprises horizontally bedded volcanic sedimentary rock including mudstones, andesites, tuffs, and agglomerates, with a depressed groundwater table below the alignment. The vertical alignment was varied as much as possible to avoid intersection of the tuffs. A major collapse near the surge shaft and with an estimated volume of 14,000m3 caused near total blockage of the tunnel.

The failure of the Rio Esti headrace is believed to be due to the first time saturation of the weak volcanic sedimentary rocks that increased the loading conditions on the shotcrete lining at various locations. The acceptable operation of the hydro station for nearly seven years is remarkable given this design. The repair of the tunnel comprised re-profiling and the installation of steel ribs and casting a final concrete lining for the entire 4.8km length. The total outage for the repairs was about 23 months.

The 155MW La Higuera hydropower project is a run-of-river scheme located within the Tinquirirca Valley about 150km south of Santiago. The 16km headrace forms part of the downstream component of a three-project cascade scheme. The tunnel was constructed under an engineering, procurement, construction (EPC) contract using drill+blast from multiple access adits, at a relatively low gradient and with a shotcrete final lining throughout most of the tunnel.

A prominent geological fault was intersected at the downstream section of the tunnel where nominal and final support comprised rock bolts, mesh, and shotcrete. An inferred weak geological formation or layer can be identified on the surface near the location of the collapse. The headrace operated for about nine months prior to collapse.

The weathered rock, associated with the geological fault, created a volume of about 12,000m3 at the collapse location⋅(2) Tunnel repairs comprised the construction of a 240m long bypass tunnel. The total outage for tunnel repairs was about 21 months.

The 181MW Shuakhevi hydro project is a run-of-the-river plant located in southwest Georgia and includes waterways of more than 35km, two dams and two surface powerhouses. Drill+blast excavation of the tunnels started in 2013 from multiple intermediate access adits.

Georgia has complex and disturbed geology due to its location between the Eurasian and Africa-Arabian tectonic plates. The rock types noted along the tunnels comprised highly disturbed basaltic andesites, conglomerates and volcanoclastic sandstones as part of a major geological syncline oriented sub-parallel to the downstream headrace.

Operation of the plant started in mid-2017 and after about three months a series of collapses and other damage occurred in the main 19km downstream waterway. Most of the collapses were reported to have fully blocked the tunnel.

Repairs originally planned a bypass tunnel at one of the major collapse areas but were eventually based on grout injections and additional rock support at the collapse areas. The total outage for the repairs was about 30 months.

The 2400MW Ituango hydro project, on the Cauca River about 170km northwest of the city of Medellin, comprises an underground powerhouse with eight intake tunnels and shafts, four tailrace tunnels, and two diversion tunnels to assist construction of a 225m high earth core rockfill dam. An additional third diversion tunnel was introduced during construction to improve the overall construction schedule.

Collapse of the third diversion tunnel of the Ituango project

In May 2018 during the rainy season a collapse sinkhole of 14m across occurred near the portal of the third diversion tunnel as the only operating diversion after the two main diversions had been plugged as part of the impounding of the reservoir. The incomplete dam spillway, together with the rapidly increasing reservoir level behind the dam resulted in an emergency decision to release a large volume of water through the intake tunnels and through the nearly completed underground powerhouse, resulting in catastrophic damage.

The diversion tunnel collapse was of an unusual circular or crater shape of inadequate competent rock above an underground excavation. The location of the third diversion portal area was within a topographic depression upstream of the two main diversion tunnels. Based on photographs, the rock cover above the collapse area was believed to be less than 10m, which is less than the width of the tunnel. The total volume of the collapse was estimated to be 120,000m3.

Collapse of the third diversion tunnel is considered to be a result of the high 50m head of internal hydraulic pressure associated with the high water levels of the river causing saturation of the surrounding overburden and imposing additional load on the tunnel support. The third diversion was designed as a shotcrete lined tunnel with conventional rock support without any concrete lining, as would have been installed as common practice for these important elements. The third diversion tunnel was not designed to accept the additional loading conditions associated with high water levels that occurred during the rainy season.

Upon review of the details, it is apparent that the main causes of collapses have been due typically to design errors – not construction defects – due to the incomplete identification of weak geological zones including medium to large faults as well as minor fracture zones containing dissolvable minerals including clays, anhydrite and gypsum. The technical disclosure of these important conditions by the geological team to the project design team is vital to avoid misunderstanding of, or non-recognition of the cyclic loading conditions of oscillating internal pressures, particularly for peaking operations, and the need for high capacity tunnel lining designs to effectively protect and stabilise these conditions for future hydraulic system operations.

Collapse pile in the Glendoe headrace

The hydropower industry has often assigned the responsibility and relied upon the judgement of site geologists to make the final lining design decisions including the simplified application of rock mass classifications without fully appreciating and understanding the nature of future hydraulic operations and imposed loadings for the tunnel. In addition, as per other significant and critical engineering structures, there appears to be no independent checking of the final lining designs.

The most common and safe method for the repair of a tunnel collapse of limited extent is with the construction of a bypass tunnel and plugging off the original tunnel between the bypass as completed at Glendoe and La Higuera.

In some regions where geological conditions are highly disturbed or non-durable, it may be warranted to provide concrete linings for a significant length or the entire tunnel.

The following conclusions are considered to be applicable to the occurrence of the recent hydropower tunnel failures: