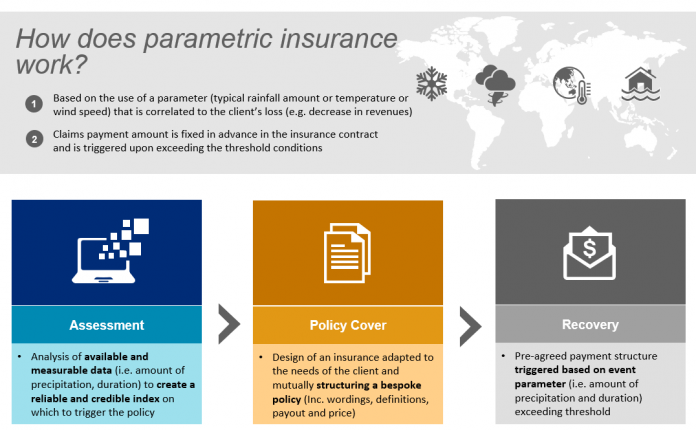 The Evolution of Parametric Insurance

Unlike traditional property coverage, parametric insurance is a type of insurance that does not indemnify the pure loss, but rather issues a set payment upon the occurrence of an objective triggering event, such as an earthquake of a certain magnitude or a hurricane of a specific intensity. Sometimes referred to as index-based insurance, this type of coverage has been around for more than 20 years, but it may now be reaching a new level of popularity as organizations look for additional alternative risk transfer options.

One of the key virtues of such coverage is that it enables companies to deliver insurance more efficiently. With parametric insurance, you avoid lengthy claims investigations—basically, an index is triggered, a payout is made, no questions are asked, there are no disputes.

Parametric insurance is particularly effective at the country level, especially in regions like the Caribbean that are prone to natural catastrophes. For example, developed under the World Bank’s technical leadership, the CCRIF SPC (formerly the Caribbean Catastrophe Risk Insurance Facility Segregated Portfolio Company) was founded in 2007 as the world’s first regional fund utilizing parametric insurance to cover catastrophe-related losses. When Panama was added in January, it became the 21st member country. Each nation benefits from quick payouts even before actual damages are assessed, providing much-needed financial liquidity that is critical for recovery efforts. This was also the motivation behind the record $1.36 billion catastrophe bond issued by the World Bank last year, which relies on parametric triggers to cover earthquake risk in Chile, Colombia, Mexico and Peru.

While parametric insurance has the advantage of quicker payouts, there is one particular shortcoming: It does not cover the actual event loss, but rather the approximate loss. This introduces what is known as basis risk, where the trigger index does not perfectly correlate with the underlying risk exposure, resulting in a situation where a policyholder suffers a loss but does not receive payment. For example, a storm could destroy your building, but you will never get paid if wind speeds never reached the agreed-upon threshold. Basis risk and the potential for such shortfalls could be one of the reasons the actual amount of parametric coverage written to date remains relatively small.

The market may be changing, however. Advances in data science, sensor technology and artificial intelligence have allowed for the creation of a broader assortment of informational indexes, opening the door to new applications for parametric insurance that go well beyond the traditional natural catastrophe uses. The new generation of parametric insurance solutions include protection for cities and airports in the event of terrorism, coverages for shipping and manufacturing companies when river water-levels fall, solutions for retailers in the event of reduced pedestrian traffic during transit strikes, and economic help for hotels in the event of infectious disease outbreaks.

What these new solutions have in common is that they are not protecting against direct physical damage, but rather the indirect consequences of events, including business interruption costs and loss of attraction, so they often rely on artificial intelligence to model the indexes upon which payout triggers are based.

Four recent uses of parametric insurance demonstrate some of the innovative new applications:

When the River Doesn’t Flow

In January 2019, Swiss Re launched FLOW, a parametric water-level insurance product designed to protect companies from the financial impact of high or low river water levels. The direct physical effects of low water levels are almost non-existent, but the indirect costs to businesses that depend on rivers can be significant.

There are many companies located on rivers that count on goods to be delivered by water, explained Thomas Keist, head of marketing innovative risk solutions EMEA at Swiss Re. If water levels decline, as in the warm, dry summer of 2018 in Europe, the first thing that happens is that ships can only be partially loaded since there is not enough draft (the distance from the waterline to the bottom of the ship’s hull) for them to be loaded to capacity. This means they have to travel the same way twice in order to make a full delivery, which adds to the expense. If water levels sink further, ship traffic may halt entirely. Without delivery of raw goods, a factory may have to shut down.

The program uses an index formula that references measured water levels at defined river gauges. FLOW agrees to pay the company a fixed amount for each day the index remains below the defined index threshold value. Factors that determine the payout amounts are the increased costs of operation, additional expenses to mitigate the situation, and expenses not covered by traditional insurance policies. No loss investigations or adjudication are required.

In 2018, Marsh collaborated with Munich Re and epidemic risk modeling firm Metabiota to create PathogenRX, a parametric insurance product designed to protect against the economic impact of infectious disease outbreaks. The product was designed for industries “that depend on people to show up,” like hotels and sporting events, said Christian Ryan, U.S. hospitality, sports and entertainment leader at Marsh. If public anxiety over an outbreak of Zika or Ebola keeps people away, those businesses can fail, and often do so quickly.

The product uses a pathogen sentiment index developed by Metabiota that gauges public fear and behavioral change in the wake of an epidemic outbreak. According to Metabiota CEO Bill Rossi, the index was made possible by advances in disease tracking and reporting, software machine learning and artificial intelligence.

Alerts by health authorities and fatality counts can also be used to measure the size of an outbreak. “With PathogenRX, we are pushing the boundaries of insurability,” said Gunther Kraut, head of epidemic risk solutions at Munich Re. “On this basis, risk layering within the policy structures is possible, which helps to achieve attractive risk premiums. The economic loss resulting from the epidemic event, however, is typically indemnified.” In this sense, it is actually a hybrid parametric insurance solution.

In November 2018, Aon launched a new non-damage business interruption (NDBI) cover designed to protect the income streams of companies with large amounts of intangible assets, such as Uber or Airbnb. The product was developed to respond to events like terrorist threats, cyberattacks, transit strikes or inclement weather that do not necessarily cause physical damage, but that can have cash-flow impacts on businesses like hotels, retailers and transportation companies.

Hotel data benchmarking and analytics firm STR Global developed the index, which makes use of advanced data and analytics. If a hotel’s revenue per available room (RevPAR) metric falls below a certain threshold, for example, then a payout is triggered. The only exceptions are mismanagement or insolvency. Swiss Re and Lloyd’s of London are providing capacity for the product.

Aon may soon be working with retailers as well, using an index developed by Springboard, a firm that measures pedestrian traffic, or “footfall.” For instance, after a bogus terror report last year, high-end London retailers suffered a £3 million uncovered loss in a single day, said Kurt Cripps, head of Aon’s Innovation and Solutions team (UK).

The Indirect Cost of Terrorism

“The face of terrorism has changed,” said Joey Sylvester, regional director of specialty programs at Gallagher. It is no longer about a building being blown up anymore, but rather people driving cars through crowds of pedestrians. Few of the buildings in the vicinity of the 2013 Boston Marathon bombing were directly damaged, he noted, but all the buildings had to shut down for a significant period.

Since there was no product to cover what had happened, Gallagher created Public Sector Terrorism Plus, which insures against acts of terrorism occurring anywhere within the borders of a public entity—or within a radius of 10, 25 or more miles—that cause a loss of tax revenue or extra expense. If the attack occurs anywhere within the radius chosen by the insured, coverage is triggered. Capacity is provided by specialty insurers within Lloyd’s syndicates.

In the future, as more data is collected about how people interact, parametric insurance could cover many more forms of risks due to non-physical-damage, including reputation risk. Insurers could measure if a client was caught in a social media “storm,” for example, through the use of machine learning techniques like sentiment analysis. If a sentiment index reached a certain negative level, a predefined payout could be triggered.

Challenges remain, however. The basis risk challenge is not going away quickly, but to mitigate it, the current generation of parametric insurance products often uses double-trigger events or staggered payout structures that allow for partial payouts for a lower category storm and progressively higher payouts for stronger storms.

Finding trustworthy third-party reporting agencies (also called independent arbiters or “oracles”) can also be difficult, particularly when operating in the developing world, said Christopher Sheehan, CEO of WorldCover. The National Weather Service might be a good “source of truth” when confirming a hurricane event in the United States, but determining drought conditions in Ghana could be more challenging. Can you really trust the local weather station using rain gauges as an “oracle”? Or do you go with a meteorological and environment-monitoring satellite service that measures soil moisture from outer space, but that may be more expensive to use?

Another obstacle to the expansion of parametric insurance is the lack of awareness and understanding among prospective policyholders. Insurers will need to convince risk managers that it really works as advertised. For example, Cripps said that he needs to talk to a NDBI prospect an average of five times before moving to the “quote” phase, while fewer meetings are required for non-parametric products. According to Matt Junge, head of property solutions for the United States and Canada at Swiss Re, parametric insurance may be an easier sell in non-corporate arenas. “In government and NGOs, it could be important in building resilience—it’s a really good solution,” he said. “With individual businesses, it becomes harder because you need to raise awareness about the product.”

Parametric insurance has other limitations, including that it is hard to see how it can be widely applied to casualty insurance, Keist said. And it will not necessarily be cheaper to buy than indemnification coverage.

But even if parametric insurance is purchased to supplement, rather than replace, conventional indemnity insurance, it can be a useful tool in the risk manager’s toolbox because payouts will be faster, with no gray areas, costly court disputes or lengthy waiting periods while a loss is confirmed. Just as many of today’s most innovative technologies and services have taken advantage of improvements in data science to help streamline a wide range of traditional processes, parametric coverage can provide a more efficient insurance product, making it an equally fitting option for the modern age.